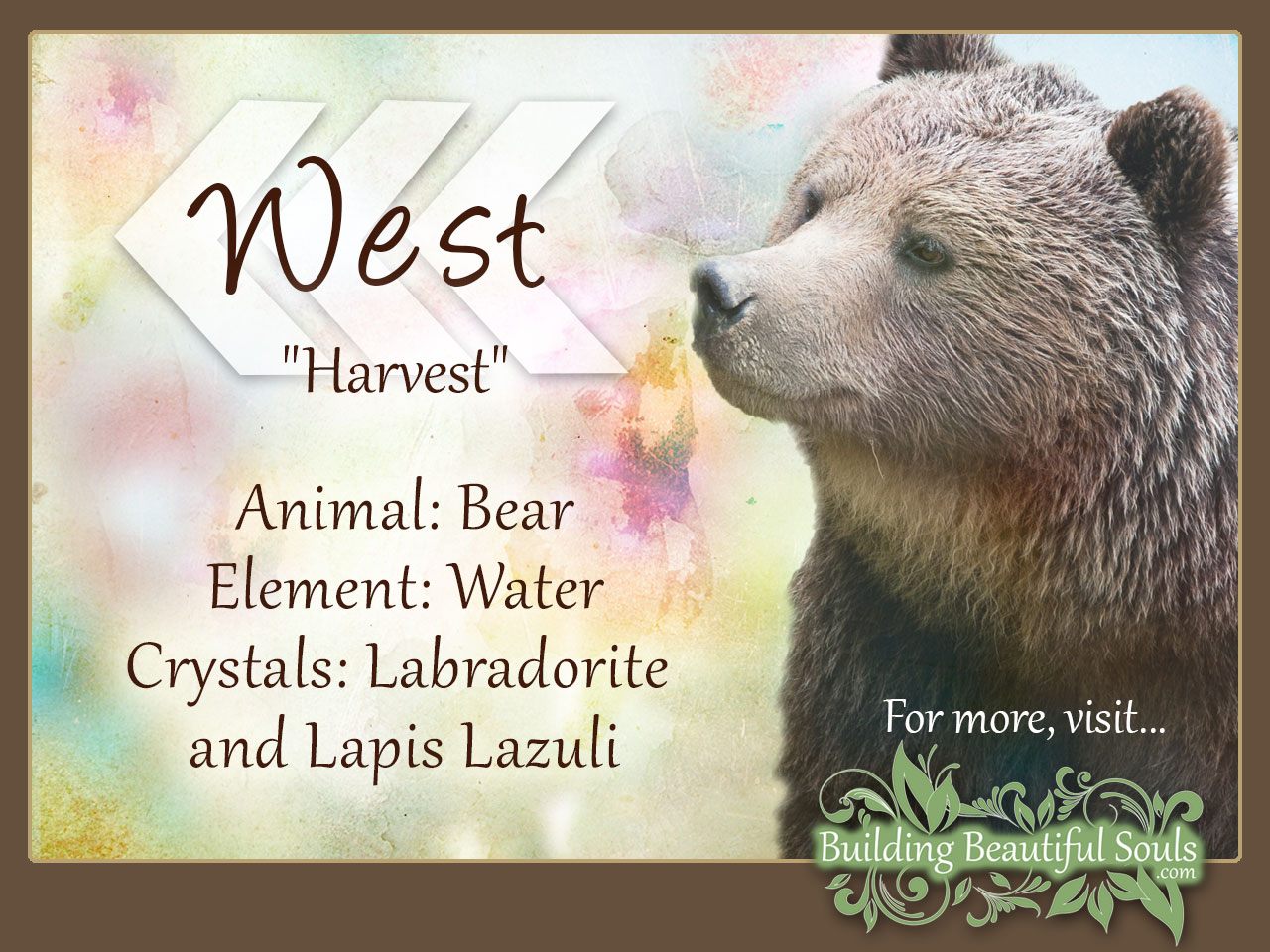 Because the sun sets toward the west many cultures associate this direction with endings and death. For early humans, the sun perishing daily leaving behind the dangers of night was a very frightening experience. Over time, the associations with the West expanded to reflect this fear and uncertainty calling the west the place of sickness, the land of the dead, the entrance to Hades (Greece) and a symbol of old age.

Where South was filled with vitality, West turns away from youthful ways toward the wisdom of the adult or elder. It is the threshold between life and the next transformation of our soul; this also gives West a sense of mystery as we cannot see beyond the Veil. In this respect, the western direction can also represent our psyche, particularly the unconscious or subconscious aptitudes or characteristics that hide there.

Numerous Shamanic practices include the West as an essential part of the vision quest – a place to purify oneself, heal, and dig deeply for messages that seem to be just outside our grasp. In these moments the West teaches to release what is no longer useful in our lives and surrender to a Higher calling; this can create a certain amount of struggle – a sense of grief for what has been but results in powerful changes in our faith, sense of self, our ability for compassion and our spiritual vision.

In Aztec tradition West was ruled by a Water and Corn goddess. Egyptians associated Amunet with the West, who would welcome their souls in the journey through the afterlife. Celts likewise drew their maps with the indication that beyond the western horizon the otherworld resided. Metaphysically speaking we can interpret this otherworldliness as a bridge not simply between life and death, but between dimensions and realities.

In Latin, the word for the “west” was vesper that roughly translates as going downward, similarly to the Sanskrit term “avah” that also means moving down. High German used abend that meant evening. Nearly all languages connected the West to the sun’s movement toward nightfall.

The Cardinal direction of West is typically connected with the fluid nature of water. All things liquid including our life’s blood come under this category. Water accepts whatever shape it’s given, even as our souls adapt to new frameworks upon each incarnation. Water has strong symbolic ties to our emotional nature, philosophy and the human capacity for change.

Bear in mind that water has many forms including the solid state of ice; this impacts the West’s correspondences because sometimes life, indeed, comes to a standstill (or seemingly so). The lesson here is that often tiny movements go unnoticed to our Human awareness – that doesn’t mean they don’t exist! Ice is water molecules moving very, very slowly until they melt and return to flow once more.

The Western Quarter of creation corresponds to the season of fall. At this juncture, social occasions ramp up, but other aspects slow down paving the way for winter. This balance between movement and stillness is also the balance between light and dark that Autumn brings. In New Age traditions we speak a lot about the Light but forget the value of darkness – this is the time when we rest when we gestate when we appreciate light even more upon waking. In another dichotomy Fall offers us abundance, but with caution. We must use our resources carefully – nothing is forever.

Think about the moment when you turn off your phone or computer. That’s a moment of transition, and the world/environment around you transforms. That is the West and Fall in a nutshell. Cycles and change are part of life We cannot hold back time’s wheel, but we can take a more active role as co-pilots in our lives with the Divine.

Wiccan and Neo-Pagan traditions align the Western Quarter with the Water element, symbolizing our deepest feelings and matters of the heart. It is capricious energy filled with creativity, insight, and the very waters of life. The beings who live here are called Undines. While it is possible to draw an Undine’s attention they rarely react in an expected matter. Like the water from which they come, they are all emotion and fluidity.

Magically speaking the West is a region for enacting spells, rituals and meditations focused on your goals, foundations, sagacity, cycles, and closure. Representative colors include sea green and ocean blue.

Dreams: Dreaming of moving west may represent a time of exploration and adventure in your life – a move toward something exciting but also unknown. If the sun sets in the west in your dream, you may be closing a chapter in your life but will find peace in it.

You can learn more specifics about dream images in our Dream Dictionary.

Feng Shui: Practitioners of Feng Shui ascribe the direction of west to Creativity, Happiness, and Children. Its corresponding colors are white and silver, and it aligns with the Metal. Placed metal framed pictures of your family in this region of the house, or your proverbial children (projects that need support). Metal wind chimes also make a great addition to this region of the house to ring out positive Chi.

The Celts associated the west with the past, our feelings, the element of water and our spirit/mind; this is the area in which the other world/afterlife resided.

As an interesting note, the Celts started a day at sunset, not sunrise. The colors for west are yellow and brown/gold.

Among Native American traditions, west is typically the direction of completion and fullness. It is where things come to a natural conclusion or stabilize, a region for manifesting goals and for coming to an intimate perception of our bodies (both in limitations and strengths).

The Natives see this direction as associated with water, dreaming, transformation and coming to terms with the unknown. When praying and facing west, they may give thanks for life’s water, for strength, peace, and comprehension of life’s cycles.

As with other cardinal directions, the Bible portrays the West with positive and negative characteristics. In some cases, the west symbolized death, darkness or evil. On a much better note, its also associated with the Temple of the Israelites, which worshippers had to travel to facing west as the sun rose in hopefulness behind.

The Bible also tells us that Abram’s obedient journey took him westward to Canaan, making the West an emblem of heeding God’s will.

Chinese Buddhism sees movement toward the west as analogous to moving toward enlightenment; this is the direction in which the White Tiger resides. This creature embodies the season of Fall, the element of metal and the virtue of uprightness. Many kings were buried with metal grave markers or tokens to show their spirits came under the Tiger’s protection. The color white and white jade are both sacred to this Being. It is said the Tiger oversees matters of war, preserving warriors from threats both human and demonic.

Among the four Kings of Heaven, West belongs to Virupaksa – the all seeing. His color is red, and a pearl represents him. Sometimes also called Pampapati, he was married to a river goddess/deva Pampa (another connection for West to moving or living water).

The Cardinal Direction West has a lot of symbolism it aligns with, much of which comes from ancient sources and different cultural perspectives from all over the world. Whether you’re looking to use symbols corresponding with West in meditation, rituals, spells, or even to enrich your understanding dreams, the unique symbols you’ll discover will serve to empower your efforts. Symbols relating to the West