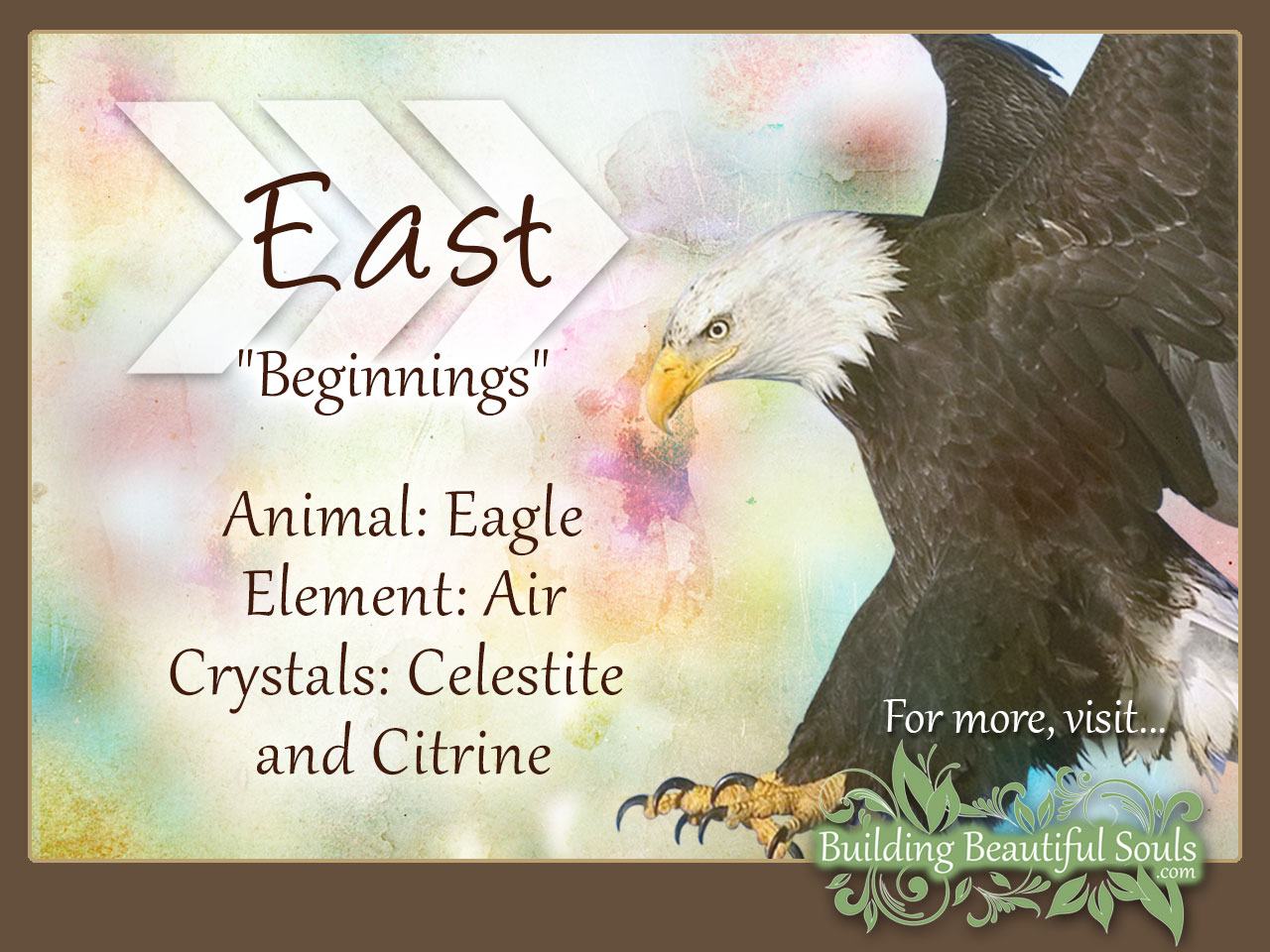 The Sun rises in the East heralding a new day and a new beginning. It’s not surprising to learn, then, that the Cardinal direction of East represents dawn, hopefulness, and inceptions. The energies of the East inspire our personal divinity, wisdom and dazzling spiritual potentials. When magical practitioners want to awaken personal awareness, they face the East and invoke the Guardians or Watchtowers that abide there.

Numerous religions give special recognition to the Eastern quarter of creation. Some have specific rituals facing east or starting in the east, for example; this is not simply because of the solar sphere, but also because East symbolizes joy, renewal and ancient knowledge. It was in the Middle East where great civilizations first grew to their glory, so the East also represents a source of enlightenment, both metaphysically and in real terms when it comes to human advancement.

The Greek word for the Eastern wind was “Anatole,” which means “sunrise.” Homer changed this to Eurus for the North Eastern Wind and Apeliotes for the South East. Hesiod called the Eastern winds “good” and likened them to the “children of morning.” Aristotle seemed to agree with this association, calling the direction of East “Apeliotes” which means, from the sun. So while East most certainly has affiliations with the Air Element, we would be remiss to overlook the rising sun and its importance to this direction’s symbolic values.

The Element associated with the direction East is air – the first breath of being. In some traditions, the predominant animal spirit for this quarter is an Eagle who grants us clear perceptions. On the wheel of life, this direction represents a time to rest and reflect and give ourselves a moment of integration before the wheel turns once more.

Some traditions associate the East with death, while others say it embodies spring and birth. This dichotomy makes sense upon further meditation — One door closing, another opening. Death is always present with life. There is no escaping that simple truth, which also makes each moment all the more precious. We cannot control that instant in fate, but what we can control is the living, day-to-day essence of our environment, actions, thoughts, etc. until the time comes to give our spirits back to the Divine.

The general Wiccan and Neo-Pagan correlations for Air compare with the observations discussed thus far. This part of the sacred circle embodies our thoughts, learning, liberation, communication, the ethereal beings, breath, creativity, the Muse, cheer and new opportunities. The key colors for East are white, yellow and light blue (or other very pale pastels).

The tool commonly connected to the East is the wand (alternatively staff or rod), which directs energy. Alternative emblems for East are smoking incense, which illustrates the Air element, and the first quarter of the Moon. Visualization, chants and incanted spells all cooperate with the East and Air. Words linger on the winds that carry their power.

Tarot Correspondence: Suit of Swords (sometimes the Suit of Wands)

Dreams: To dream of the East is a sign a new beginning is on the horizon in your waking life. You may find a situation where you are required to rely heavily on your intellect or you might even find conditions mentally taxing. Dreaming of the East it to dream of the Air element as well, here you may find you need to learn how to be flexible, adaptable, or at the ready for fast or unexpected changes ahead. The East Cardinal Direction in dreams is also about being enlightened through learning pursuits, and finding your own voice.

Want to intensify the understanding of dreams? Then check out our complete and comprehensive Dream Dictionary for greater understanding, here on Building Beautiful Souls.com!

Feng Shui: Every direction in Feng Shui has a specific animal and energies associated with it. The East is the Rabbit, and it represents the human capacity for love, kind-heartedness, honesty, and genuineness. Elementally the East correlates to wood. If you find the Chi of your home is missing these traits, add wood to the Eastern part of your home; This is particularly essential since the East is the area of the home that governs the family relationships and overall health – including emotional and spiritual wellbeing. One easy example is adding a wooden framed picture of your family on an Eastern wall for improved harmony. If you feel you need improved perspectives, you can also add a small water feature like water bamboo in this region or a mirror that opens the path for positive energy.

The ancient Celts categorized the East in much the same way as modern Wiccans do – as a source or beginning, particularly for opening communications and inspiring growth. On the Wheel of Time, it symbolized the future and possibilities, providence and potential wealth. Where Celtic and Neo-Pagan ideas contrast is in the element and animal associated with the East. Among the Druids and many Celtic tribes, the East represented the good earth / soil, and the creatures here were bees and the salmon.

As one might expect, each Tribe often had its own name and symbolic meaning associated with cardinal directions. Generally, however, East is the direction of spirit, positive thought, mindfulness, and redemption. It carries the energy of vision and the gift of prophecy. It works cooperatively with the Air element connecting the Earth Plane to Etheric realms and even Heaven.

Shamans looked to the East and Air as a part of vision quests, dream journeys and an energy that helps keep emotions and healthy and balanced.

Christianity is filled with references about the East. Linguistically East is “kedem,” which means red (probably an allusion to the color of dawn). The Bible says the wise men came from the East seeking the Christ child, and the Messiah himself was presaged as coming likewise from the East toward Jerusalem. In each of these situations, a person or item arriving from the East was a blessing – something good. However, other stories imply that persons moving eastward (as to Babyl) ended up in trouble, meaning that East was somehow closer to God’s will and heart.

In Buddhism the direction of East houses contentment. The eastern realm is called that “without distress” and the Buddha entitled it the “Virtue of Goodness.” In Himalayan artistic renderings, this is the realm of Dhritarashtra, a guardian who watches over the musicians that create the Music of the Spheres. Dhritarashtra made a vow to Buddha to be the protector of this region of Heaven and earth.

The Eastern direction corresponds with a variety of symbolism based on culture and the context in which the direction is viewed. By understanding the symbols related to the direction, you can add layers of meaning to ritual work, spells, meditations, writings, and more. Symbolic understanding of the cardinal direction of East may even help you when it comes time to interpret dreams if symbols relating to the direction appear in a dream narrative. One thing is clear, the East is more than a mere compass point or a direction of movement. It is rich in meaning and can enrich how you view and interact with the world if you familiarize yourself with its symbolic meaning.